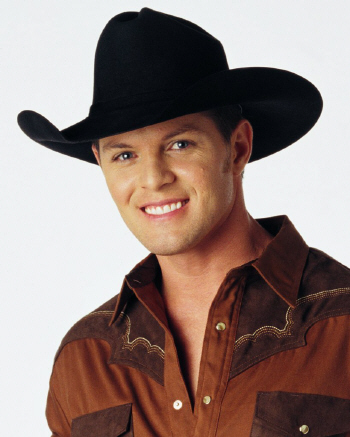 Just as quickly as he came, however, he was gone. He wouldn’t resurface until 2005, with an announcement that he was leaving the music business.

What could have been is bittersweet for Kersh and those who knew him best in the country music industry, as there seemed to be a general consensus that the surface of Kersh’s career hadn’t been scratched before it was derailed by a vocal cord injury.

However, before Kersh was “Breaking Hearts and Taking Names” on country radio, he was just a music loving kid from Texas.

“Music was always a love and a passion as far back as I can remember,” says Kersh, who lists George Strait, Randy Travis, and Clint Black as some of his influences.

Even with this passion for music, Kersh had no intention of making his own for a living. “I was going to college and just going to become a physical therapist or take a sales job in the medical field,” says Kersh. However, he says he jumped at the chance to sing in a dancehall band in Texas.

That dancehall band, The Emotions, was managed by Mark Hybner, who recruited Kersh to sing lead vocals.

“I conducted a search for a male vocalist that I thought would have a
chance at being a successful country music star,” says Hybner. After being asked to listen to another dancehall band and evaluate their lead singer, Hybner says his attention diverted elsewhere.

“The vocalist was good; however, I was constantly drawn to his back-up singer,” says Hybner. “After I listened to a few songs, I asked the back-up singer if he would be interested in auditioning for me.”

That backup singer was David Kersh.

Hybner offered Kersh the position, asking him to sing with the band for a year so he would be prepared to get a record deal in Nashville.

At first, Kersh was skeptical.

“Mark came to me and told me he was going to get me a record deal,” says Kersh. “I laughed and said okay.”

“Next thing I knew, I was performing at a dancehall in Giddings, Tex. and there were three label representatives there,” Kersh says. He was offered a record deal from two of the representatives and signed with Curb Records.

“I’ll never forget the first time David came to my office in Nashville,” says McMakin. “He pulled out his guitar to run through a couple of songs I had sent his way. As soon as he opened his mouth to sing, this really big sounding voice came out and filled the office.”

“Goodnight Sweetheart” was released in October of 1996. Although the album’s lead single, “Breaking Hearts and Taking Names” wasn’t a big radio hit, peaking at 65 on the Billboard charts, it was Kersh’s first original song he would hear on the radio.

“It was indescribable,” says Kersh. “I had a flood of emotions going through me. All of the sudden it was all real.”

The album produced three more singles, each reaching top 15 status. The third single, “Another You,” written by a then-unknown Brad Paisley, two years away from getting his record deal, reached number three on the Billboard charts.

Kersh’s second album, “If I Never Stop Loving You,” picked up right where “Goodnight Sweetheart” left off, with the lead single, named after the album, also reaching number three on the Billboard charts.

Kersh was receiving great praise from Curb Records after his first two albums.

“Curb was telling us that David was going to follow in Tim McGraw’s footsteps and be a major priority for the label,” says McMakin. “On the road, he was giving Kenny Chesney a run for his money.”

However, the beginning of the end was already near.

Kersh suffered a vocal cord injury while opening for Reba McEntire in the summer of 1998.

“I was only singing 20 minutes a night,” says Kersh. “The vocal cord is a muscle that needs to be worked out to stay strong. It caught up with me.”

Kersh began to lose control of his voice and lose pitch on stage.

“I was embarrassed,” says Kersh. “It killed my confidence. It affected me so badly, I didn’t want to return to the stage.”

Kersh kept working in the studio, beginning work on his third album, but McMakin says the issues lingered there as well, describing Kersh’s voice as “shot.”

Kersh, embarrassed by his lack of vocal control, essentially disappeared from music.

“Singing came as natural to me as breathing,” says Kersh. “And then one day, I couldn’t breathe.”

He would resurface in 2005 with a message on his website saying that he was “quitting the music business.”

In part, the letter reads, “My heart is just not in the music business anymore. I can’t deal with all of the B.S. that goes on in this industry now. Nothing is in my control anymore, and it all just makes me a miserable person.”

Kersh’s time in country music was over. The sour taste of what could have been is still in the mouths of those around him.

“I listen to those albums once in a while but honestly, it’s painful memory and reminder of what could have been for him as well as Mark and myself,” says McMakin. “He would have been my big break at the time.”

Hybner says he listens to Kersh’s albums frequently, but also says Kersh got the short end of the stick.

“I think he could have been Entertainer of the Year at some point in the future,” says Hybner. “Fate had a different turn for him.”

Looking back, Kersh, who now sells real estate in Texas and got married in 2009, would do a few things differently.

“I would treat the opportunity as a career and take it a little more seriously,” says Kersh. “And certainly take better care of my voice.”

However, he does appreciate the fans that still enjoy his music.

“I love my fans,” says Kersh. “It’s heartwarming to hear from them these days. Brings back great memories.”