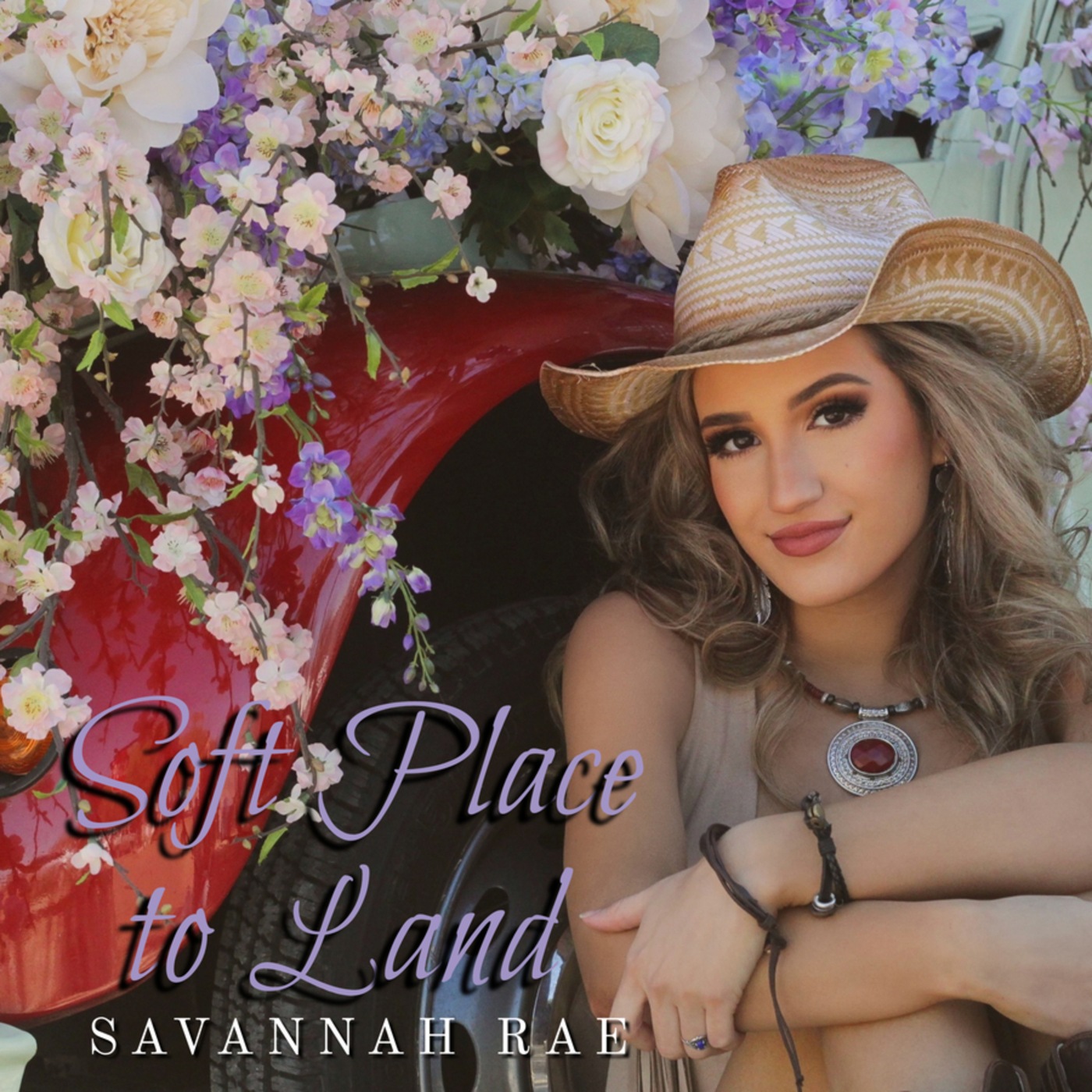 Savannah Rae is a journeywoman, and she’s proud of it.

The San Antonio, Texas native has spent a lot of her life on stage, and she admits that hitting the road with her music is her favorite thing to do, and Rae has now encapsulated those feelings with her new single, “Soft Place to Land,” her first release in a year and a half.

Though “Soft Place to Land” wasn’t what she entered the studio to write or record on the day she ultimately did so, she made use of extra time she had in the studio and crafted the song, which captures her love of being on the road, but also longs for a place to settle down at the end of the day. Twanging guitars and a driving drum track are matched by Rae’s steady vocal to create an anthem of sorts for traveling musicians.

We chatted with Rae about falling in love with music at an early age, all about “Soft Place to Land,” collaborating with heavy-hitting songwriters, what listeners can expect from her upcoming releases and more!

Pro Country: Your bio mentions that you were exposed to many genres of music growing up, but it was the classic country sound that largely caught your ear. What was it about that sound, the artists and the songs that connected with you at such an early age?

Savannah Rae: I have such a vast appreciation for ALL types of music, however, country music has always been rooted in my blood. Being from a small town in Texas, you grow up listening to all the greats of country, and it’s pretty much ingrained in you from birth. I’ve always loved all the organic sounds and all the raw instrumentation that country is so known for. Lyrically, the genre is top notch. They always say that all you need is three chords and the truth, and that is so accurate, to create music that really touches people.

PC: After an Evanescence concert when you were just 11 years-old, you were inspired to pursue music as a career. Can you talk about that show and coming to the realization that music is what you wanted to do for the rest of your life?

SR: As mentioned previously, I have an incredible love for all types of music. My parents instilled a ton of appreciation for all different genres, and started taking me to concerts when I was around 10. I saw Amy Lee up on that stage at an Evanescence concert and I told my mom that I wanted to be just like her. I wanted to pursue music. Next thing I knew, my parents enrolled me into vocal and guitar lessons, and the rest was history!

PC: In 2018, you sang backing vocals for Demi Lovato on the American Music Awards and on The Voice. How did the opportunity to perform with Demi come to you, and what was it like to be on stage with someone so immensely talented and in front of potentially millions of viewers?

SR: I got the incredible opportunity to perform with Demi from my producer in Los Angeles, Andrew Lane. She was in need of backup singers, and he recommended my name. I cannot thank him enough for giving me an experience that I will remember forever! Demi is an absolute powerhouse vocalist and such a talent. She was also incredibly kind and thanked us numerous times just for being there. Being on stages of that magnitude was definitely nerve-wracking, but such an unforgettable and insane rush. I had such a blast and I’m so thankful for such an incredible opportunity.

PC: Your new single, “Soft Place to Land,” was your first single release in nearly a year and a half. Why did you feel that it was the right single to return with, and what was your level of anticipation leading up to its release?

SR: It was definitely a long time coming! I had been wanting to release new music for so long, but wanted to make sure I came back with a song that really meant something to me. After we wrote “Soft Place,” I had a good feeling about it. I sent it over to my team and they really liked it, and I think right then and there, we knew that this was the next single for me. I was incredibly excited to get something out there again! I couldn’t wait for it to come out! I get very antsy about releasing new music, and my team always has to tell me to be patient. I would completely leak the entire song on Instagram the day I wrote it if given the choice [laughs].

PC: “Soft Place to Land” was written with Britton Cameron. Can you take us in the writing room and talk about the inspiration behind the song?

SR: So “Soft Place to Land” was actually a sort of (Bob Ross voice) happy accident. I had gone into the studio to write and record an entire other song, which took a large portion of my day. However, we still had some time left before I had to leave, so Britton and I sat down and just started messing around with the guitar. About 45 minutes later, “Soft Place to Land” was born! We were super inspired by my life as a traveling musician and how I’m never really knowing where I am going to end up. However, we wanted to put a positive spin on it and say that wherever I do end up, I hope it’s a nice soft place to land.

PC: You’re preparing the release of a concept video for “Soft Place to Land.” What inspired you to create a video in that way, and how fun was it to be able to put it together with award-winning cinematographer J.B. Lawrence?

SR: I’m such a Texas girl at heart and wanted to definitely incorporate my home state into the video, but still show me traveling about. We filmed the video in Round Top, Texas which is absolutely beautiful, and really lent itself to the story. It’s a fun, lighthearted video that shows me wandering about in a city I had never been to before. J.B. was a blast to work with and really helped capture the vision that I had painted in my mind. He has a great eye and brought my concept to life!

PC: Your bio mentions that your next single is called “Typical Texas Girl,” and that you co- wrote the tune with Pam Tillis. What information can you give about the song, as well as the following 2021 releases you have lined up? What can listeners expect to hear?

SR: “Typical Texas Girl” is an homage to my home state and to all the bad ass women from it. This song is my baby and I am SO excited for it to be out there in the world! It definitely is one of my favorite songs that I have ever written. You didn’t hear it from me, but it may or may not be out within the next couple of months. I also have a slew of other songs that you will hear before the year is over that I am ecstatic about. You will be listening to more rocking country, stuff that has a lot more edge to it. Heavy guitar and very Miranda Lambert, Gretchen Wilson-esque sounds!

PC: You have shared writing rooms with several heavy-hitting songwriters, including Holly Lamar, Britton Cameron and the legendary Pam Tillis. What can you take away from writing with such high quality writers?

SR: Having the opportunity to work with such esteemed and well-regarded songwriters in the country music world has been such an invaluable experience for me. I have written some great songs with them and they have passed priceless lessons and wisdom down to me. They have really helped me take my songwriting to a new level and given me amazing tricks of the trade to help me be the best I can be!

PC: As someone who has been performing most of your life, what has the adjustment of live music being largely put on hold over the last year-plus been like for you? How were you able to stay busy and creative?

SR: It was definitely a difficult year to say the least. I had about 84 festivals, fairs and rodeos that I was playing in 2020. I was supposed to be on the road for about 250 days. The last show I played was the San Antonio Stock Show and Rodeo, and I was on my way to the Houston Stock Show and Rodeo right after, but it got cancelled right in the middle of it. That was in March 2020, and I did not play another show until December 2020. It was a long nine months, however it did give me a lot of time to work on my craft. I wrote and recorded a LOT during that “off-time” so that when things do open back up, I could hit the ground running and get back to what I love most, which is touring!

SR: I will be writing and recording as always, however I hope to release a TON of new music out into the world before the end of the year. It has been a long time coming, and I waited a year and a half to release this new single, however, I think I have been working hard enough on this new material that it’s finally time to let the songs see the light of day. I am extremely excited for everybody to see and listen to what I have been working on for so long. I hope to get back out on the road as soon as I can as well! I’m currently in the process of booking some awesome shows around the US!

SR: I am so excited that I have some new music out into the world. Thank you to everybody who has followed me for some time and been so patient with me. I hope this song, plus all the others I will be releasing this year, was worth the wait! Your support is invaluable to me and I cannot thank you enough for supporting me and my music! This Typical Texas Girl thanks you!

*”Soft Place to Land” is featured on The Best of Pro Country playlist!*