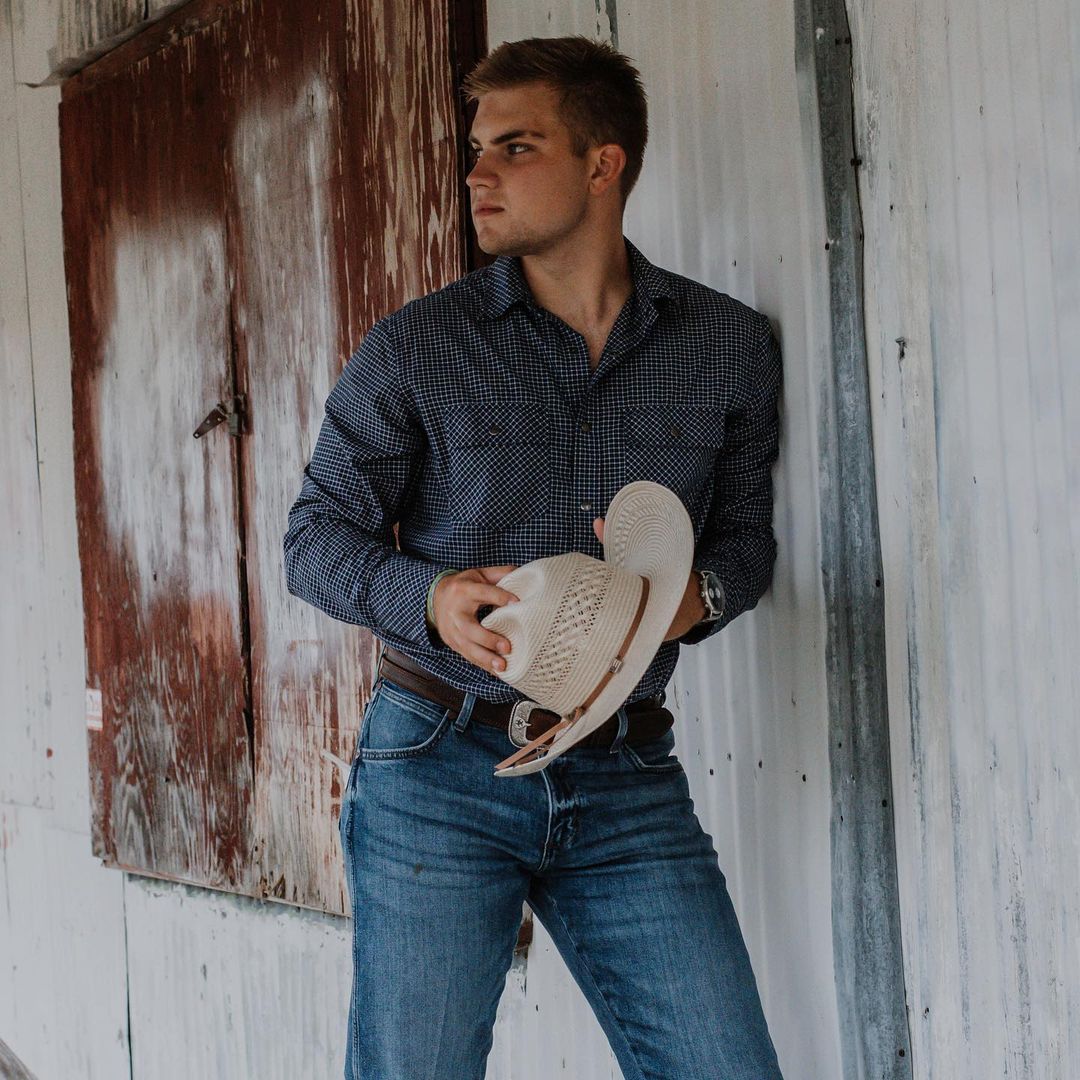 If you’re so inclined for a two step or a tear in your beer, your local honky tonk is a surefire way to satisfy those urges. However, if you’d like to save yourself the gas money and trip, you can just as easily give Braden Jamison’s new EP, Hardwood Heartache, a spin and get that same exact feeling.

From George Strait references to actual “hardwood heartaches” and everywhere in between, Jamison paints a picture of a night in a honky tonk like a guy who’s had a few, as drenches the EP’s four songs with enough steel and fiddle to push things over the top.

We chatted with Jamison about his early start with performing, his early success, all about Hardwood Heartache and each of its songs, his plans to hit the road with his music and more!

Pro Country: Your bio mentions that you draw influence from artists of the 1990s and 2000s. Who were some of those artists that have helped you shape your sound?

Braden Jamison: I draw from artists from all decades, but my sound comes out sounding like 90s and 2000s country. My biggest influences are George Strait, Keith Whitley, Merle Haggard and Eagles, and even current artists like Randall King, Josh Ward and Cody Johnson.

PC: You’ve said in the past that you grew an early love of performing. What was it about being on stage that connected with you so early in life?

BJ: Being on stage provides me with an adrenaline rush that I can’t really find anywhere else. Even when I was a child playing in church, when I’m on stage, I feel like I’m right where I’m supposed to be. I started seriously considering pursuing a music career in high school. I was a multi-sport athlete and I loved the rush I felt on game days, especially playing football. I discovered that performing and being on stage was the only thing that compared to the rush I experienced playing quarterback. I knew my athletic career couldn’t last longer than high school or college for me, but being able to write and perform music provides me that same purpose and satisfaction.

PC: At what point did your early interest in music and performing translate into wanting to/realize you could pursue it as a career?

BJ: When I was a junior in high school, I decided not to play basketball so I could focus on my music. That same basketball season, I was blessed with the opportunity to play at the inauguration of Oklahoma’s Gov. Kevin Stitt and to open for Toby Keith.  That was the moment where I became fully invested and started fully believing in my dream to be an artist.

PC: You released your debut EP, A Heart’s Gotta Break, in 2018, which has since earned over 120,000 combined Spotify streams since its release. How validating was it for your debut release to be so well-received and to tangibly see the streaming success it had?

BJ: That was extremely validating to me. People wanted to hear what I had to say, and that’s all you can ask for as a singer-songwriter. I still get requests to play songs off that first EP, which my bass player, Colt Nipps, recorded for me on an iPad in my living room. The positive reception and responses have inspired me not only to keep going, but also to write on a deeper level and better relate to my audience.

PC: As you were readying your newest EP, Hardwood Heartache, was there a level of pressure you felt, internally or externally, to match or surpass the success of A Heart’s Gotta Break?

BJ: I was never anxious about the release of Hardwood Heartache because I felt like it was my best work yet, and I am really proud of it. Over the past year or so, I released a couple of singles, and my producer, Kendal Osborne, and I really worked to capture the sound I heard in my head.  I feel like for the first time in my career, I have truly found my sound on this project.

PC: You released your single, “Playin’ George” in November of 2020, the first release from Hardwood Heartache. Why did you decide to release “Playin’ George” as the lead single from the EP?

BJ: When I released “Playin’ George” last fall, I had no plans of releasing an EP. It’s one of my favorite songs I’ve ever written, and I feel like it completes the theme of Hardwood Heartache. So, I decided to include it on the project.

PC: “Playin’ George” has already earned well over 120,000 Spotify streams in less than a year since its release. What do you think it is about the song that is allowing it to connect with listeners the way it has?

BJ: It is just a fun song. There is nothing deep or moving about it, it is just a simple story of trying to get to know a girl and using George Strait as your wingman. I tried to include clever ways to take advantage of George’s song titles and phrases.  The point of the story was that the lady should be warned that the guy is playing George Strait songs, so things might get serious; suggesting that his songs have that kind of power and influence. I think country music fans love George Strait and appreciate the references. I tried to make the music as “George Strait” as possible, and I think people really connect with that too.

BJ: Honestly, I have never given that any consideration.I just write music that I feel inside me and that I would listen to. Obviously, I want people to hear my music and have no doubt that it’s country, but it’s just what comes out of me. I couldn’t go pop with a mouth full of fireworks. So far, the majority of my live shows have been in Oklahoma and Texas, and the audiences there really seem to appreciate that sound. I wrote both of those songs after lots of recommendations to record some faster songs. I just love sad, slow country songs, so these were a fun challenge and experience for me, and I’m really pleased with the finished product.

PC: “Hardwood Heartache” serves as track two on its EP. Why did you decide to have it serve as the title track of the EP?

BJ: Hardwood Heartache is, by no means, a concept album, however, the songs all share the same setting and kind of tell the story of what takes place in a honky tonk every weekend, step by step. In a way, the term ‘Harwood Heartache’ sums up that experience, so I chose it as the title. As far as its placement on the EP, I tried to place the songs in an order that would tell a story.

PC: What do you hope listeners take away from Hardwood Heartache after listening all the way through?

BJ: I hope for 14 minutes and 26 seconds, people will forget about whatever they’re going through. I strongly believe that good country music makes you feel things. It is emotional, relational and powerful. I want people to enjoy the music and to enjoy this story. In addition, I hope people hear this EP and know that this is who I am as an artist.

PC: Along with promoting Hardwood Heartache, what are your plans for the rest of 2021 and going into 2022?

BJ: I have school and the band has work and family to juggle, but we are currently adding dates to play in December and we are hoping to play quite a bit more in 2022, so be on the lookout!

BJ: I am so thankful for the opportunity to answer your questions. I hope that your audience will check out my new EP. I would love for them to connect with me on social media:
Instagram: braden_jamison
Twitter: braden_jamison
Facebook: Braden.Jamison.Music
Website: bradenjamison.com

*Hardwood Heartache is featured on The Best of Pro Country playlist!*