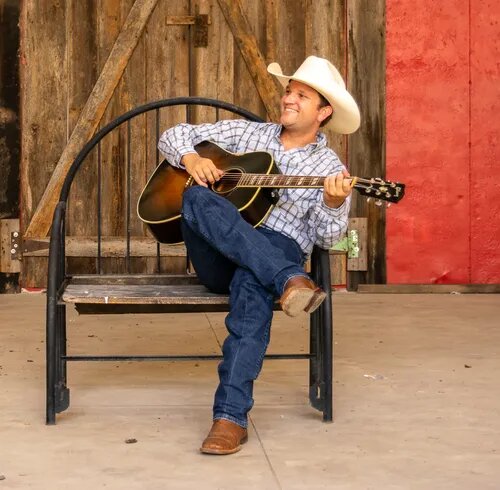 If you’re on the hunt for high quality, fiddle and steel-driven Texas country music, search no further than David Adam Byrnes, because he’s one of the best on the scene doing it right now, and he’s proven that again with his newest single, “Smallest Town on Earth.”

Equipped with a made for the stage sound, Byrnes’ single is his most recent offering in a slew of singles from his forthcoming album that shows the Arkansas native with a true sense of direction of the artist he wants to be, and most importantly, he has the freedom to do just that.

We caught up with Byrnes to talk all about “Smallest Town on Earth,” as well as his album release strategy, his success at the Arkansas Country Music Awards, more new music and more!

Pro Country: Your last album, Neon Town, spawned several hit singles and earned well over two million streams on Spotify. How encouraging was the response that the album received from both fans and radio?

David Adam Byrnes: It was truly just proof that people out there love true, traditional country music, and it let me know that what I’m doing is working. After years of playing the “Music Row” game, it was the first time I took a risk and just did the record I’ve always wanted to do, so for it to be a successful release was just a great feeling and something I could 100% finally be proud of.

PC: Why did you feel that your newest single, “Smallest Town on Earth,” was the right follow up single to your last single, “Cold Beer Time”?

DAB: A lot of it has to do with timing on all of the singles as a whole, but we knew we wanted a good tempo for the summer. It’s also quite different from all of the other music I’ve released, so it just felt like a good time to switch things up and show a different side of my writing style. It also happened to work out that both of those songs were written with Wade Kirby, which was pretty cool!

PC: You co-wrote “Smallest Town on Earth” with Wade Kirby. Can you take us in the room and talk about how the song came together?

DAB: This was the second song I had written with Wade, and he does a very good job of trying to think outside the box; rather than be melodies, ideas or just a lyrical approach. I had the title in my back pocket for years, and for some reason, that day just felt like the day to throw it out. Wade threw out that unique chord progression, and the song just kind of wrote itself. It was a fun write, we wrote that one very quickly. I knew I wanted to record it the second it was done. Ironically, the team wondered if it truly was in my wheelhouse style wise, but the studio musicians did a heck of a job making sure it was 100% me.

PC: “Smallest Town on Earth” has already landed on Spotify’s ‘Texas Country Now’ playlist. How encouraging is it to earn a nod from a major playlist so soon after a single release?

DAB: Editorial playlists are a huge key in getting music out today, so to be picked by a playlist by Spotify itself is a huge honor, and once again, validation that I’m making music the way I should. Thankfully, they have chosen to playlist every song we have released over the last seven singles.

PC: You have a new album on the way, and have been releasing a new single from it about every month. Can you talk about planning that release strategy and why you felt it was right for this project?

DAB: It’s such an interesting time to be in the music business. In the past, you’d need to select all 10-12 songs at once, and then make sure every song had its place, and almost piece it together like a puzzle. Really with this record, it was all about what the next four releases would be, and we strictly just picked what we thought were the best songs at the time of the session. Obviously, the time of the year played a piece of it, but some of the songs were also ones I’ve wanted to release and just haven’t had the opportunity to, such as “I Find A Reason” and “Accidents.” I really wanted to record them on the Neon Town record, but they just didn’t exactly fit the puzzle. Then there’s ‘Like I’m Elvis.’ It was my first cut as a songwriter by Air Supply’s Russell Hitchcock. It has been recorded by several acts over the years, but I’ve always wanted to put out my version, and the timing just finally made sense. The rest have all been brand new songs that the team and myself all were very excited about it. It’s also been very fun being able to write something and take it straight to the studio without having too much time to overthink about what fits and what doesn’t. It feels more like stories I hear about the old days when writers could write a song and hear it on the radio days later, and I love the thought of it.

PC: What information can you give about the remaining songs from the album? What can listeners expect to hear?

DAB: A lot more TONK. These songs are loaded with fiddle and steel. There’s even an old school shuffle in the mix. A lot of folks don’t know that when I recorded the Neon Town record that the thought of coming to Texas wasn’t even in my head yet, so we still were thinking with a commercial mindset. I feel like this record is going to show four years of me in Texas getting even closer to my roots and making country music the way I have always envisioned it. Even more, I feel like my mindset when picking songs now are “what do the fans want?” compared to “what does Music Row want?” like in my past.

PC: You recently earned Entertainer of the Year and Male Vocalist of the Year at the Arkansas Country Music Awards, marking your third consecutive year of winning at the Show. What does it mean to you to earn that recognition from within the industry?

DAB: Anytime you get nominated, it’s an honor. So many artists dream of even getting noticed on that level, so to bring home the actual awards, it’s just a great feeling of knowing that you’re doing what you’re supposed to. I spent a lot of years doing things the way the industry told me to do them, and it seemed like nothing clicked. To be 100% hands on and running everything in my career, how I want it, and then to be recognized for it, there’s just no better feeling. Even more, my parents have been my biggest fans from day one. They’d stay up all night to take me to play shows when I was underage, drive me to the gigs, put up with band members crashing at the house, and helped do whatever they could to get this thing off the ground. I always dreamed of winning Entertainer Of The Year, and I finally got the incredible opportunity to publicly let them know that I couldn’t have done it without them. It may not have been the CMA’s or ACM’s, but this was just as important to me. No matter what scene I’m in or state I live in, I’ll always proudly be an ole Arkansas boy, and I’m honored to be awarded by my home state that I’m so proud of.

PC: Your tour schedule is pretty full for the rest of the year. How much are you looking forward to hitting the road hard and bringing your music, new and old, to so many different stages?

DAB: There’s really not time to have time off. I don’t think I’d know what to do with myself if I had it anyway [laughs]. I truly love what I do and I spend all week counting down the days until I hit the road again. I’ve dreamed of being this busy playing live my whole life, so it’s nice to finally be living my dream.

DAB: Really the same thing I always do. We’ll keep hitting the road, and as the crazy summer schedule winds down a bit, I’ll be back to writing a good bit. As excited as I am to get this record out, my eyes are always looking ahead to the next song, but I’m very excited to see some of the places on the summer schedule we don’t really get to go to during the rest of the year. I’m very excited to start the album release tour!

DAB: As always, I’m just excited to meet everyone on the road and so thankful for the fans and all the people on my team that keep this dream alive. I’m very, very thankful and blessed to have such amazing people in my life!

*”Smallest Town on Earth” is featured on The Best of Pro Country playlist!*