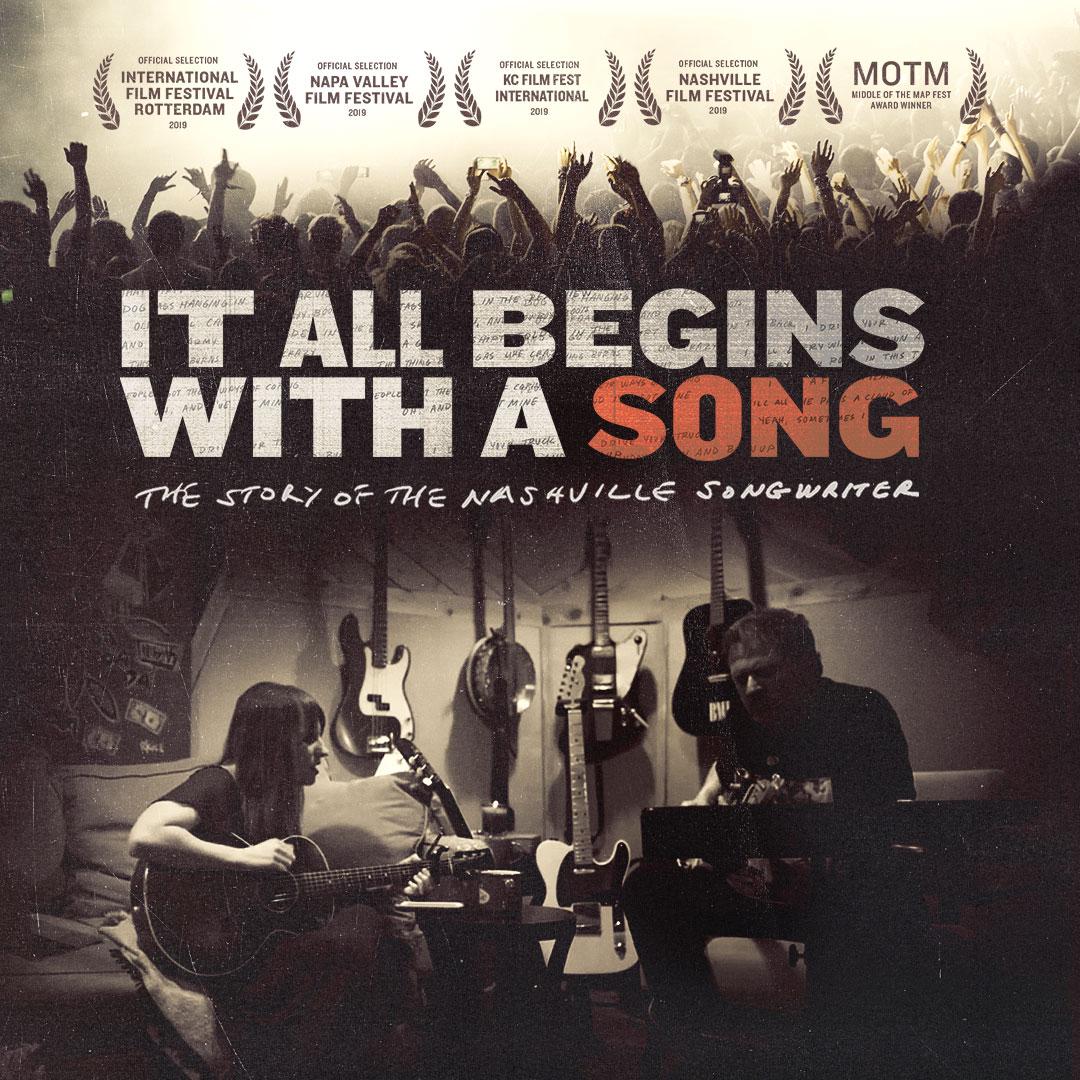 The journey of a song is quite the interesting one. So often, we hear the finished product on the radio or on our streaming service of choice, but don’t take into account the work and craftsmanship that got the song to that point. Unless you’ve found yourself in the audience at a songwriter night in Nashville, you may never get to hear how the song was originally conceived.

When we heard about a documentary that detailed the process of songwriters and featured the likes of Garth Brooks, Brad Paisley and Kacey Musgraves, among many other prominent songwriters across many genres, we were instantly excited. When we saw that it hit streaming services, we didn’t hesitate to buy and watch it that same night.

It All Begins With A Song: The Story of the Nashville Songwriter is a treasure for both casual and passionate music fans alike, and is sure to instill a deeper appreciation of the songwriting craft within the first few minutes of the film.

The film opens with Brett James (perhaps best known for co-writing “Jesus, Take the Wheel”) running through his resumé, which includes more than 500 cuts and 21 number one singles, yet noting that no one has any idea who he is, alluding to the fact that songwriters are so often the nameless faces behind the songs that are loved by millions.

As hit songwriters like Rodney Crowell run through the history of songwriting in Nashville and what has since made it a songwriting Mecca, James adds validity to it, nothing that “there are a hundred songs being written in Nashville at any second.”

The talent that permeates through Nashville is made abundantly clear with the resumés of the artists and songwriters included in the documentary, but it is NSAI executive director Bart Herbison who puts it in perspective by saying “Everyone who is a waiting, every person who valet parks your car is a world class, gifted musician or songwriter.”

However, with all of the talent that runs through the city, it’s also made clear that there is a camaraderie among the songwriters that make up that talent pool, as Liz Rose (“Girl Crush”) notes that a songwriter can spend years waiting for their big break, as several of the writers mention that part of the songwriting process is being continually knocked down with the hopes that they don’t get back up.

That struggle on the road to success is exclaimed by one of the most touching moments in the film, as Caitlyn Smith performs her song “This Town is Killing Me” that discusses the low lows that come with being a songwriter, with the song concluding that she will get up and do the same the next day.

Though many of the songs featured in the film have since become staples in their respective genres, it’s mentioned that the songs that do reach that level are “simple, but profound,” but many of the writers, including John Hiatt, joke that they “wish they knew how to write a song.”

The beauty of this film is that is portrays songwriting as a real job and the responsibilities that come with it. The heaviest moment in the film shares the story from Jessi Alexander and Connie Harrington about how their song “I Drive Your Truck,” written with Jimmy Yeary, became not only a massive hit on the radio for Lee Brice, but allowed them to share a moment with the father of the subject of the song. In a tear-filled performance at his home, Alexander plays the entire song, using a pencil and rubber band as a makeshift capo, that is sure to leave a lump in the throat of anyone watching. The exchange ends with Alexander noting that moments like that are better than any royalty check she would receive for the song.

It All Begins With A Song is the songwriter’s equivalent to Ken Burns’ Country Music documentary, and its impact on songwriting and the perception of it should be widespread. It gives faces to those who are so often faceless, is sure to promote deeper thought the next time a viewer connects with a song on the radio about the people behind that feeling. It’s an essential watch for music fans.