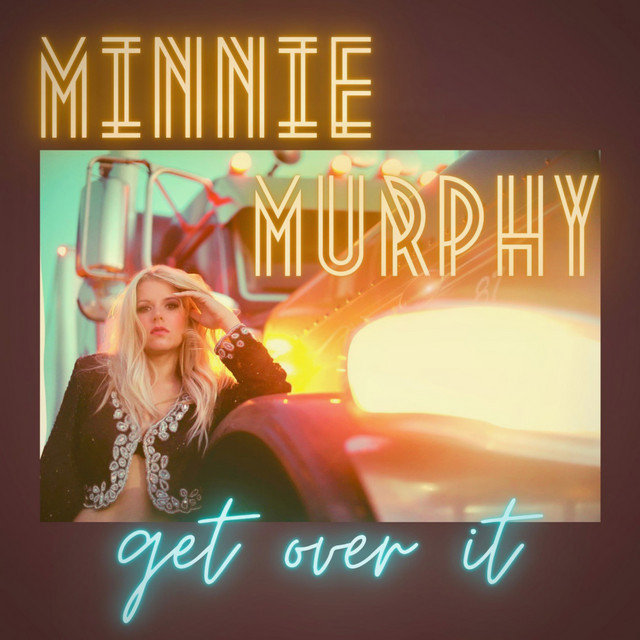 Minnie Murphy has worn many hats in her career. She’s experienced the unfortunately all-too-common tale of a major record deal falling through, and after a short stint of feeling jaded towards the industry, she picked herself back up, and has been a demo singer, a songwriter, and most recently, she’s stepped back into the limelight as an artist again.

It almost sounds like a movie, and Murphy’s doesn’t just have a happy ending, it has a happy new beginning. Her newest single, “Get Over It,” has become her most-streamed song on Spotify, and the song has also found its way on to curated playlist and to ears around the world. Though she has proven she can’t be pigeonholed into one musical lane, Murphy’s venture into a classic, steel guitar-drenched country music is proving itself to be fruitful, and with an entire albums-worth of tunes on the way, Murphy’s upcoming release is certainly one of our most anticipated releases in the remainder of 2021.

We chatted with Murphy all about “Get Over It” and the response it has received, as well as getting an early start in music, her journey through the industry, resiliency, her plans for the rest of the year and more!

Pro Country: Your bio mentions an eclectic mix of musical stylings that you were surrounded by growing up. Who were some of the artists that were connecting with you early in your life and have since influenced you sonically?

Minnie Murphy: My parents played music for a living. My dad would play bars and do a lot of classic rock and country like Dire Straits, Brooks & Dunn and Dwight Yoakam, and then my mom was giving me a jazz and blues influence. I grew up listening to a lot of Shania Twain and Mariah Carey; I just really tried to absorb everything. I began taking piano lessons when I was 10, and I really fell in love with it.

PC: Having parents that played music for a living and being constantly surrounded by music, did it almost feel inevitable that you would follow that path as well?

MM: It was something that I always wanted. I always remember being asked what I wanted to do when I grew up, and it was always music for me. It’s such a magical and powerful thing. It almost feels like a portal to God, you can really get hypnotized by it [laughs].

PC: You signed a record deal with Sony at just 17 years-old, which ultimately fell through with no album being released. What was it like for you at such a young age to have that kind of peak and valley experience in the industry? What emotions came with it?

MM: It was a lot. My family and I all moved to Nashville together. I’d been coming to Nashville to write with people, and we recorded five songs. It was a lot of pressure, and I felt really bad when it didn’t work out. I went through a bit of a breakdown, but I picked myself back up again and started waiting tables and playing around town. Ultimately, I think those ups and downs are good. I had another deal after that that didn’t work out and went back to waiting tables again. I eventually came to the conclusion that I wasn’t going to give up. I knew that I was meant to be a writer. I quit my waitressing job and I went down to Evergreen. I kind of had a bit of a reputation around town for singing, and Evergreen wanted to sign me as an artist. By that time, I didn’t really want to do it because I was a little jaded. I decided I would try to write for them. I didn’t really have a plan, it was the first time I didn’t have my dad managing me, so I went in there by myself and asked to write for them. I didn’t know how much money to ask for or anything [laughs]. I figured they’d say no, but they said yes, and I’ve been there ever since!

MM: My fiance and I went through a lot together. We had a miscarriage and kind of got lost in some addictions. We came back from it and had Phoenix, and then the world shut down. It was a lot to handle, but it was a whole new beginning. I love being a mom so much. Everybody always says that when you have kids, your life is over and you have to give up your dreams, but he inspires me so much to where I want to leave something behind for him and set an example of following your dreams. It’s made me get my shit together. It doesn’t matter what happens now, because I feel so lucky to be a mom. I’m not having an inner critic stopping me along the way. The need to follow through is there for me now, and I’m really grateful for that.

PC: You released your last single “Can’t Change a Man” in April, which served as your first release in six years. What was your level of anticipation leading up to the release and putting your name back out there into the world? Why did you feel it was the right re-introduction for you?

MM: That’s actually an old song that I wrote with my mom when I was on Sony. I must have been about 20 back then, but we just never released it.  as I was putting this project together, my dad said we should put it out to get back into it. I’m glad we did it with that one, because it helped give me a little bit of a platform. I love the classic country style all of that song as well!

PC: You wrote your new single, “Get Over It,” with Don Bedell and Trafton Harvey. Can you take us in the room and talk about the inspiration behind the song?

MM: When I’m writing for Evergreen, they will periodically give us assignment writes. The song title is Don’s idea, and they had asked just to write that song. We ended up making it an old dive bar, throwback country song, and that just felt like it was the right thing to do with the song. I can relate because it kind of talks about the part of ourselves where we want to numb the pain so we make a choice and disregard the consequences.. I think country music has never been afraid to expose that dark side that we all share. It may be hard to talk about, but if you put it to a song, it becomes a relatable and it helps to heal. I’m really proud of it!

PC: You served as co-producer on “Get Over It” with Jon Conley. How important is it for you to have a certain level of a hands-on approach with the music and to be involved in that manner?

MM: I’ve always loved to be right there and be hands-on. Especially with vocals, I love to go through it all because I’m kind of a perfectionist. I wish that I could do all the engineering and play all the instruments too, but it’s also a blessing to leave that to people that know what they’re doing [laughs]. John is such a great talent; he played most of the instruments on everything and he plays for Kenny Chesney. He’s such a down-to-earth guy. He would talk to me on the phone and have long conversations talking about all kinds of things from life to music and everywhere in between. I was blessed that he would give me that energy, respect and time. I’m really grateful to work with him. It was an answered prayer.

PC: In just a few weeks since its release, “Get Over It” has become your most-streamed single on Spotify. How validating is it to you and the artistic direction you’ve taken to tangibly see the support that “Get Over It” has seen so far?

MM: I’m blown away. I always have a tendency to feel like nothing’s ever good enough or nobody’s going to like something, and I beat myself up so much. You never know what people are going to like. I found myself listening to the track almost every morning last winter. It’s just something that doesn’t get old to me. We’ve got people helping us promote it and I’m trying to engage people more on social media. I think the energy that I’m feeling now is different than before. I’ve obviously had a record deal and had songs put out nationally that I didn’t really feel great about. I think if the artist feels good about a song, people can pick up on that. I feel really good about this song, and I’m so excited that people have been listening to it!

MM: There’s a couple things in the works that I’m not really allowed to talk about yet [laughs]. We’re going to be releasing a Spanish version of “Get Over It.” My best friend from childhood is fluent in Spanish, so she’s translating it now, so I’m super excited about that! We’ll have this whole album released this year hopefully. We just released an animated lyric video for “Get Over It,” and we’re editing the official music video as well. There’s going to be some live streams and we have some shows booked as well, so we’re just going to keep plugging away!

**Minnie’s music is featured on The Best of Pro Country playlist!**